In all the excitement surrounding the SRT Demon, we almost overlooked the fact that Jeep slipped out the most-powerful production SUV at the same time. It involves the Hemi Hellcat engine, so we should probably take a closer look.

It must only be a matter of time before every product sold by Fiat Chrysler Automobiles in the USA comes fitted with the 707hp 6.2-litre supercharged engine. This is now the third model to be endowed with the monster Hemi, following the Challenger and Charger Hellcat models. We would include the SRT Demon too, but Dodge wants us to regard that particular ludicrous motor as unique. It has a Demon face cast into the block – so ok, we will.

The Grand Cherokee Trackhawk was hardly Detroit’s best kept secret, but that doesn’t stop it still being a little exciting. With 707hp, and 645lb-ft of torque, this is the most powerful production SUV to exist. This easily surpasses the already quite mental Dodge Durango SRT released earlier this year. Forget the Lamborghini LM002, the Bentley Bentayga W12, or even the BMW X5 Le Mans – the Trackhawk beats them all. The only way to get more power in an SUV would be to turn to aftermarket tuners.

Instead this craziness comes direct from the Jefferson North Assembly Plant in Detroit, and is responsible for the Trackhawk hitting 180mph, and doing 0-60mph in just 3.5 seconds. We repeat, 3.5 seconds. That’s quicker than a Ferrari F40, quicker than a Lexus LFA, and even quicker than the Challenger Hellcat! Yes, the Jeep actually springs to 60mph in less time than the Dodge, thanks to the advantage of a 4WD system. With launch control, and a standard Torque Reserve feature, the Trackhawk is capable of hurling itself forward with reassuring violence. Thankfully the eight-speed gearbox and drivetrain have been enhanced to cope with the gigantic forces at work to make this all possible.

Bilstein adaptive suspension is standard, and can be adjusted by choosing several drive modes on offer. Naturally there’s a sport mode, but there can’t be many SUVs that have the option of a ‘tow’ mode, along with a ‘track’ setting. The latter decreases gearshift times, stiffens the suspension, and sends 70% of the torque to the rear axle. Just in case you’re wondering, yes the Trackhawk can actually tow – up to almost 3,500kg. There is a ‘snow’ mode included as well, which is said to reduce horsepower to maximise traction on icy roads. There’s no word on whether the Trackhawk will off-road, but someone will undoubtedly test that at some point… 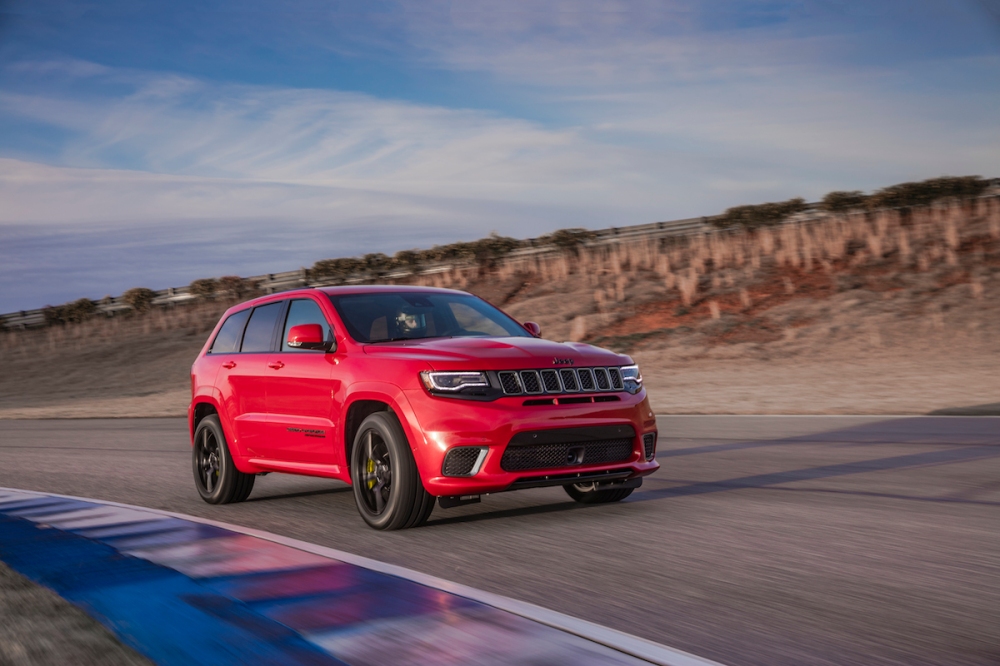 Brakes, supplied by Brembo, are suitably vast with 15.75-inch discs up front, with 13.78-inch versions at the rear. The calipers – six and four-pots respectively – are painted yellow, so you know they must be good. Finished in titanium, the standard alloy wheels are 20-inch in diameter, and 11-inches wide, with optional lightweight versions also on offer.

Other exterior enhancements include a deeply sculpted and vented bonnet, black-chrome quad exhaust tailpipes, a tail spoiler, and bi-xenon headlights mounted in a gloss black grille. There are no fog lights fitted to the front of the Trackhawk, with their space given up for additional cooling and air intake grilles. Oh, and in case anyone is in any doubt as to what you’re driving, there are substantial ‘Supercharged’ badges applied to the front doors.

As with any new performance vehicle, a flat-bottomed steering wheel is standard, along with hefty leather and suede sports seats. The 8.4-inch multimedia screen includes instant dynamometer displays, showing horsepower and torque readouts. These can be screenshotted and saved to a USB stick, presumably so you can upload your exploits to Facebook or Youtube later.

Mmm, lots of metal. Apparently some of it is real, too.

Maybe get a luggage net, otherwise all your junk will end up back here

No pricing details have been released yet, but somewhere in the region of $80-90,000 (£64-72,000) would seem reasonable, and present a distinctive premium over the existing $66,000 SRT Grand Cherokee. Customers will receive their cars in the last quarter of 2017, giving them plenty of time to get excited about it. Just don’t expect it to come to the UK.

We’ve questioned previously whether the world needs something like the Challenger and Charger Hellcat models. The Grand Cherokee Trackhawk takes that idea and multiplies the complete gratuitousness of it to an almost farcical position. Nobody needs a 707hp SUV, that can pull 3,500kg, but also run 0-60mph in 3.5 seconds. It truly is unnecessary, pointless, brash and vulgar. Accordingly, we love it.