As the first major event on the global automotive calendar, the North American International Auto Show sets the scene for the rest of the year to come. Yes, there’s a definite US-centric bias to a lot of the offerings on show, but many of the new cars will also be available globally. Check out the key trends below:

Blue is definitely the colour for promotional cars
Last year at Geneva we noted that blue had replaced brown as the paint colour of choice for cars on display at motor shows. At Detroit, things got turned up a level, with virtually everything painted bleu this year. Ford even went to the extreme measure of painting its new performance models all in the same shade of Liquid Blue for their Detroit show stand. From Fiesta ST to F-150 Raptor and, obviously, the new GT everything was the same hue. It’s worth noting that Liquid Blue isn’t a production paint colour so, despite being teased by it, you can’t pester your local dealer to deliver you a Focus ST wearing that shade. Notable exceptions to the blue-ness were the new Acura NSX in red, and Cadillac who painted their ‘V’ series performance models white.

Audi Q7 in blue; like the leaked promo photos. 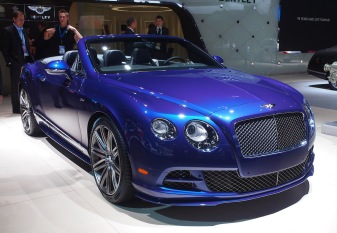 Bentley gets in on the blue action

The X6 M – not made better by being blue

The revised Chevrolet Volt made its debut

Lexus continues the the trend of painting ‘F’ models blue

Scion’s iM in a lighter shade 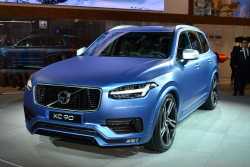 No brown for the Volvo XC90

The V6 is the new V8
Again, this trend is primarily represented by Ford’s offerings, but it’s quite a significant one. The new GT supercar packs a twin-turbocharged EcoBoost V6, where once lived a supercharged V8. The F-150 Raptor has also ditched the 5.4 and 6.2 litre V8s from the previous generation, again favouring a boosted 3.5 litre V6. Only the Shelby GT350R Mustang seems to have emerged from Detroit with all eight cylinders still intact. The EcoBoost unit has, of course, already arrived in the regular Mustang model.

Does this matter? Well, yes; it shows that engine downsizing and the need for forced induction are just as apparent in the USA as they are in Europe, for a start. It’s also a cultural shift – the big-block V8 has been iconic in terms of US performance cars since the dawn of time. Ford is, however, determined to roll out its EcoBoost turbo engines and slotting one into its halo supercar is a massive statement of intent. Whilst Dodge and General Motors may be sticking with the classic V8 for now, don’t count against seeing turbo V6 models appearing somewhere in the not too distant future.

Crossover Coupes are not going away anytime soon

In Detroit, even Volkswagen decided to get involved with the trend for coupes on stilts with the Cross Coupe GTE. Alongside the BMW X6 and Mercedes GLE, the march towards these confusing crossovers isn’t going to end in the near future. At least Volvo elected to try to buck the trend, and start a new one at the same time, with the S60 Cross Country model. We’re unconvinced as to whether it really works as an idea, but no doubt we’ll see Mercedes-Benz rushing forward a C-Class 4Matic with jacked-up suspension, lest the Stuttgart firm avoid not filling every possible niche.

America seems to be back on track
The US car industry was rocked heavily by the global recession. Both Chrysler and General Motors filed for Chapter 11 bankruptcy in the wake of the economic meltdown, whilst Ford had to rely on credit lines agreed in 2007. The cradle of automotive consumerism hung in the balance but, due to some tough decisions, the ‘Big Three’ have seemingly emerged at the other side of a deeply troubling period of time.

In the past year we’ve seen Dodge release the manic Hellcat twins, with General Motors showing off ever more extreme versions of the Chevrolet Corvette, along with the Cadillac ‘V‘ series creations. With Ford’s massive performance show off in Detroit 2015, it’s clear that horsepower is still safe in the USA, even if it’s being produced with less cylinders and more turbos.