EngageSportMode’s BTCC Correspondent returns with his take on all the action, or lack of, from Thruxton. 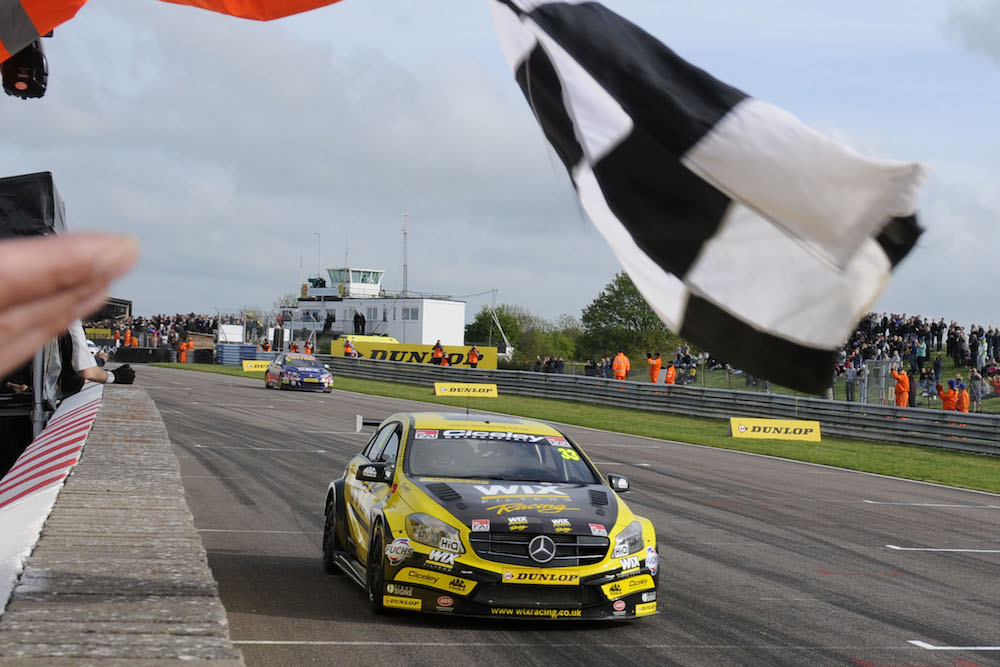 A year ago, ESM visited Thruxton for not a particularly enjoyable experience and although ESM weren’t there in person this year, the action hardly set many viewing pulses racing. That’s not to say the racing was bad, it just wasn’t great, as we had three different winners.

Plenty of action happened before the races on Sunday. Infiniti Support Our Paras Racing have ditched Richard Hawken, after just one race meeting at Donington, and replaced him with ex-F1 driver Martin Donnelly. From driver changes to track changes at Thruxton… Following last year’s big smashes at Church involving Simon Belcher and Nick Foster, Thruxton have finally installed more substantial barriers at the corner and luckily they weren’t tested during the BTCC races this season.

However, there were plenty of damaged cars on Saturday. Dan Welch took no part on Sunday due to damage and Hunter Abbott sustained damage too, although he was able to race 24 hours later. Belcher must be wondering what Thruxton has against him, as he was unable to race after a big shunt with Mike Bushell in qualifying. Bushell was left on crutches following a leg injury and although Belcher was fine, his car was not. This meant that the grid started with a mere 25 cars for Race One. 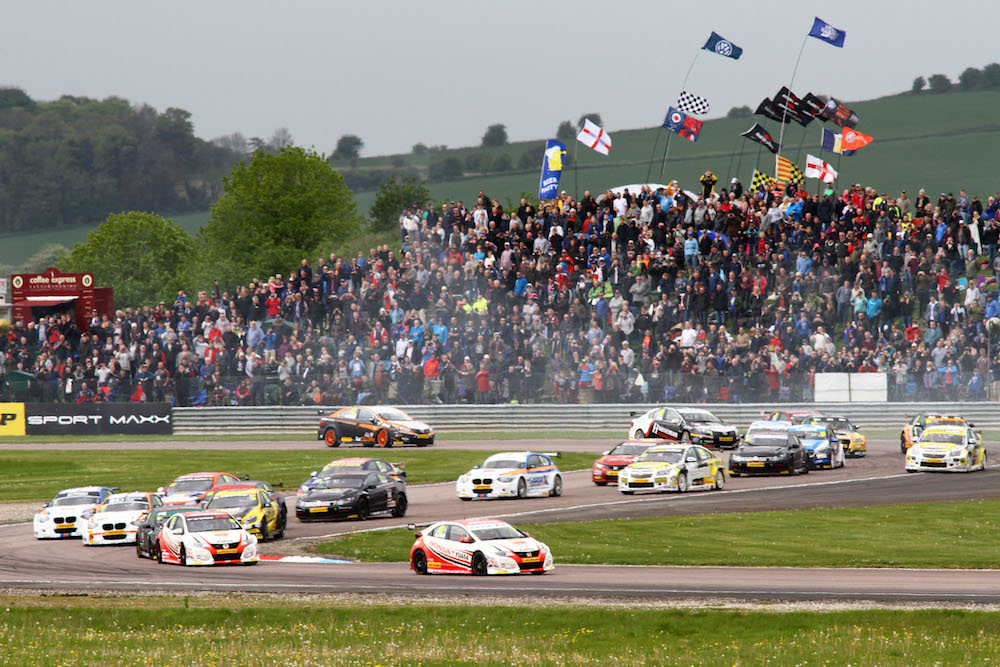 None of the races were particularly exciting; yes there were good parts and bad parts, but a fairly average weekend all in all. Aron Smith secured his first ever pole position, but he made an awful start (due to not seeing the lights because of his advertising strip on his windscreen) and the Hondas of Gordon Shedden and Matt Neal powered through and stayed there for the duration. Smith was still having a strong race until the curse of Thruxton punctures struck, meaning he eventually finished 21st. Smith certainly had the pace to win and was showing great race craft with close racing, but it wasn’t to be. 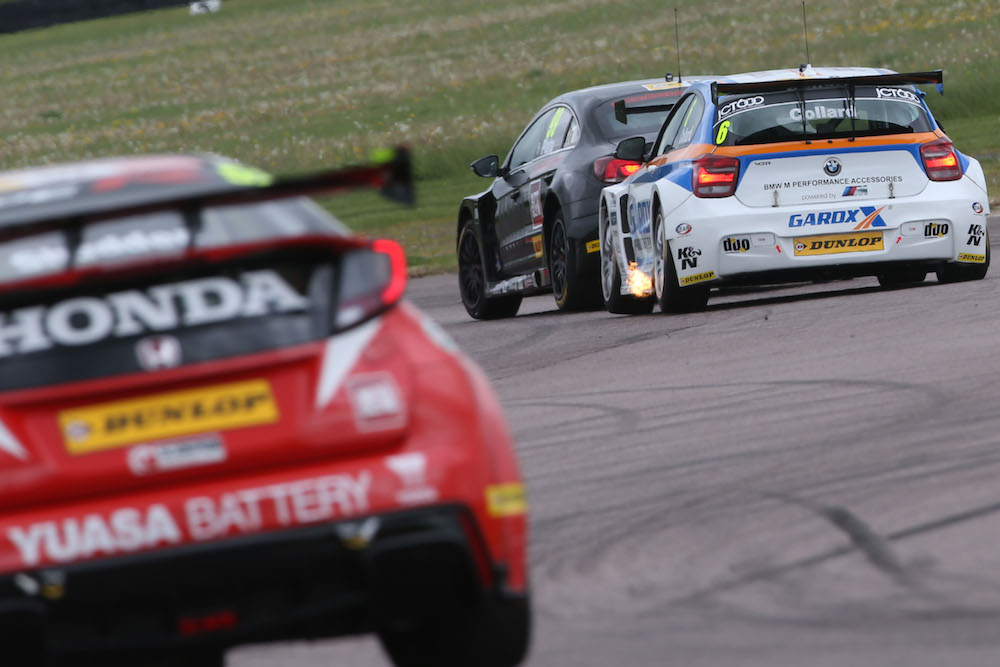 Race Two was pretty non-eventful after the first lap, as Jason Plato showed everyone how to defend and win. Rob Collard pushed Plato all the way in the race and it was Collard that started the better, using his rear wheel drive advantage. However, a superb move by Plato on the second lap, around the outside, approaching the chicane secured him the victory. The opening lap saw Adam Morgan and Andy Priaulx collide just after the start, which sent them both sideways momentarily, and it meant that several other drivers had to take avoiding action, notably Jeff Smith and Josh Cook who ended up carrying around advertising boards for a lap.

The final race of the day brought a little bit more action and intense racing compared to the other two races as Morgan completed a fairly comfortable lights to flag victory as the first four on the grid remained in the top four positions come the end of the race. It was Morgan’s first time across the chequered flag as a leader because his previous victory came courtesy of a Plato 20 second penalty at Brands Hatch at the end of last season. The top four of Morgan, Andrew Jordan, Sam Tordoff and Colin Turkington all had fairly easy races to hold on to their positions. Neal finished sixth after a fantastic race, ballast free, from the back after he suffered wheel damage after punting Smith in the second race. Neal is really showing his old form this season and it is likely he is going to be in the championship hunt at the end of the season. 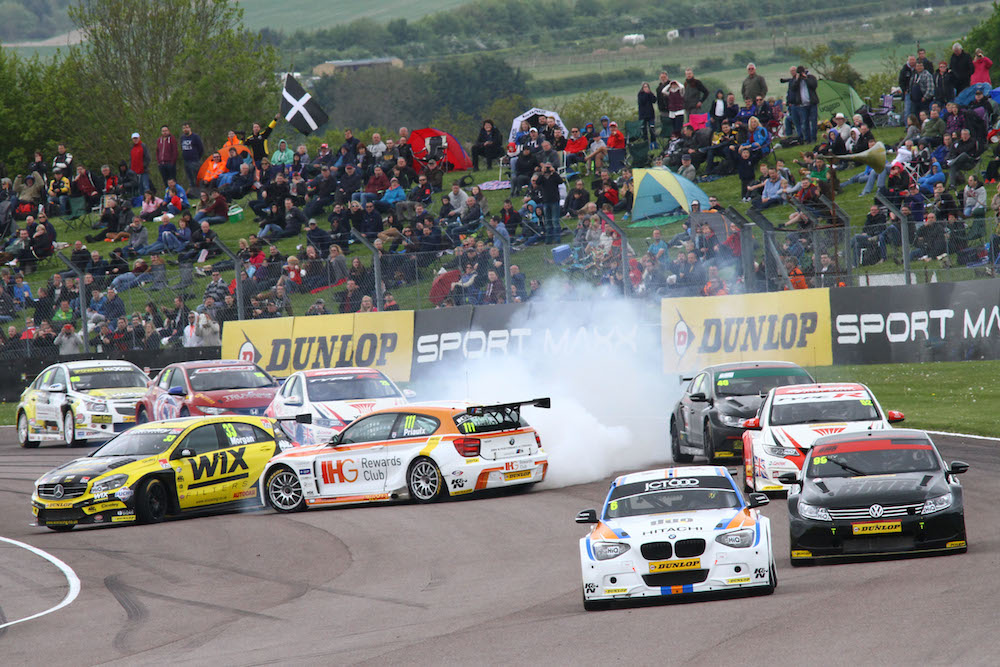 It’s worth noting that the current top 5 in the championship, separated by only 15 points, are the 5 previous winners of the crown that are racing this year. Cream rises to the top? Interestingly, Morgan is 6th; could he be the 6th champion on the grid at the end of the season? He is certainly developing his ‘Mr Consistent’ form and more weekends of double podiums, including victories, will certainly have him at the top or very near despite the strong competition.

The tyres always prove to be a talking point at Thruxton because of the speed and abrasive nature of the track, but this year they seemed less of a focal point which I think was beneficial to all. Smith was probably the most high-profile casualty of a puncture, but I think with more experience and knowledge the teams are starting to get their set-ups spot on. It was great to see the drivers just hanging on to their cars at such high-speed, proving a worthwhile reason to visit Thruxton.

Next time out, in four weeks, the BTCC are in the North at Oulton Park where I’m hoping for better than last year. This year, the cars will be back on the Island Circuit layout after last year’s experiment back to the International Circuit didn’t really work out with three processions.

Championship Standings after Round 9 of 30:

Team BMR – Volkswagen CC (Plato, Turkington, Scott, A Smith)
A first ever pole for Smith and the cars looked good in the hands of Plato, Turkington and Smith, but less so Scott, who crashed out in the final race. 8/10

Honda Yuasa Racing – Honda Civic Type R (Neal, Shedden)
Another great weekend for Shedden and Neal’s weekend was damaged by his punt on Smith, but he recovered exceptionally in the final race. 9/10

MG 888 Racing – MG6 GT (Goff, Jordan)
Another decent weekend for the MG pair and I’m sure with a little more luck one of them will be winning a race soon. 7.5/10

Exocet AlcoSense – Audi A4 (Abbott, Austin)
The pair both finished all the races and secured a few points. It just doesn’t seem to be happening for them though this season. 5/10

Welch Motorsport – Proton Persona (Welch, Wilmot)
No Dan Welch this weekend due to damage and Andy Wilmot finished all three races for the first time this season. 3.5/10

Infiniti Support Our Paras Racing – Infiniti Q50 (Donnelly, Palmer)
Palmer finished all three races and Donnelly made a decent start before not being able to finish the final race. 4/10

WIX Racing – Mercedes-Benz A-Class (Morgan)
Morgan will be delighted with his first ‘proper’ victory and backed that up with another podium. 8th in the second race isn’t to be sniffed at either. 9/10

Laser Tools Racing – Mercedes-Benz A-Class (Moffat)
Moffat managed to finish all three races despite an incident or two, scoring a couple of points along the way. 8/10

Handy Motorsport – Toyota Avensis (Belcher)
Bushell never saw him when he was exiting the pits in qualifying and the barriers made sure it was the end of Belcher’s weekend. Thruxton seems to be a bogey circuit for Belcher N/A

Speedworks Motorsport – Toyota Avensis (Ingram)
A couple of 10th place finishes sandwiched a retirement. Ingram’s drive in the final race was excellent as he came from near the back. 6/10

Power Maxed Racing – Chevrolet Cruze 4dr (Newsham)
A couple of 12th places after a retirement in the first race. 5.5/10