Did you honestly think everyone had forgotten about hot-hatch Nürburgring lap times, after Honda’s Civic Type-R effort last year? No, of course not. So what better way for VW to celebrate 40 years of the Golf GTI than by setting a new Nordschleife record of 7:49.21. 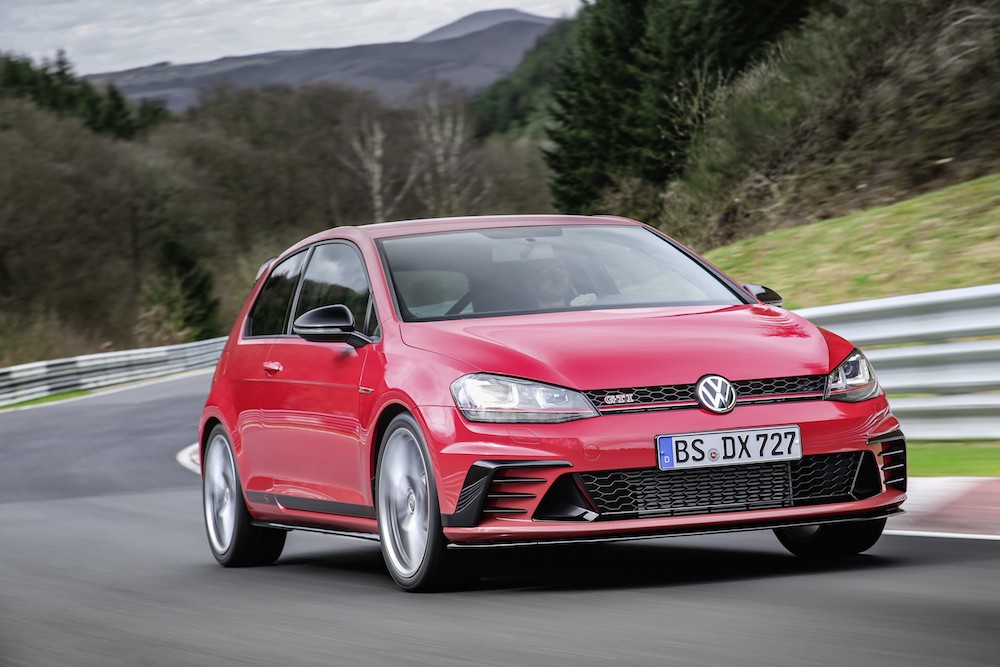 We’ve already seen the regular GTI Clubsport, and it’s actually on sale now, but the ‘S’ version has been cranked up to 11 to ensure it can beat that pesky Civic around the ‘ring. That means more power, less weight, and a special Nürburgring mode for the driving profile selector. Yeah, we’re not convinced ‘engage Nürburgring mode‘ is quite catchy enough for us to consider rebranding. Sorry, Volkwagen. However, we can say the S has cured the slight indifference we felt  from first reading about the normal Clubsport when announced last year. 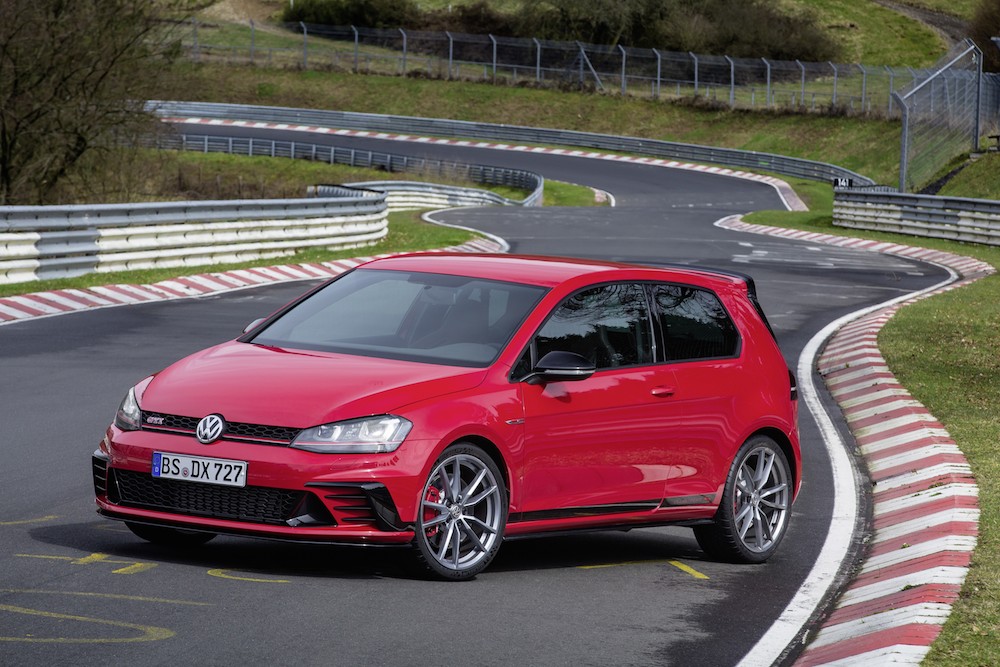 The Nürburgring mode tunes the suspension, engine, steering, and exhaust to best suit attacking the twisty German circuit. Racking up a decent ‘ring lap isn’t all about rock-solid suspension, due to numerous bumps and dips littered along the 12.9 miles of tarmac. 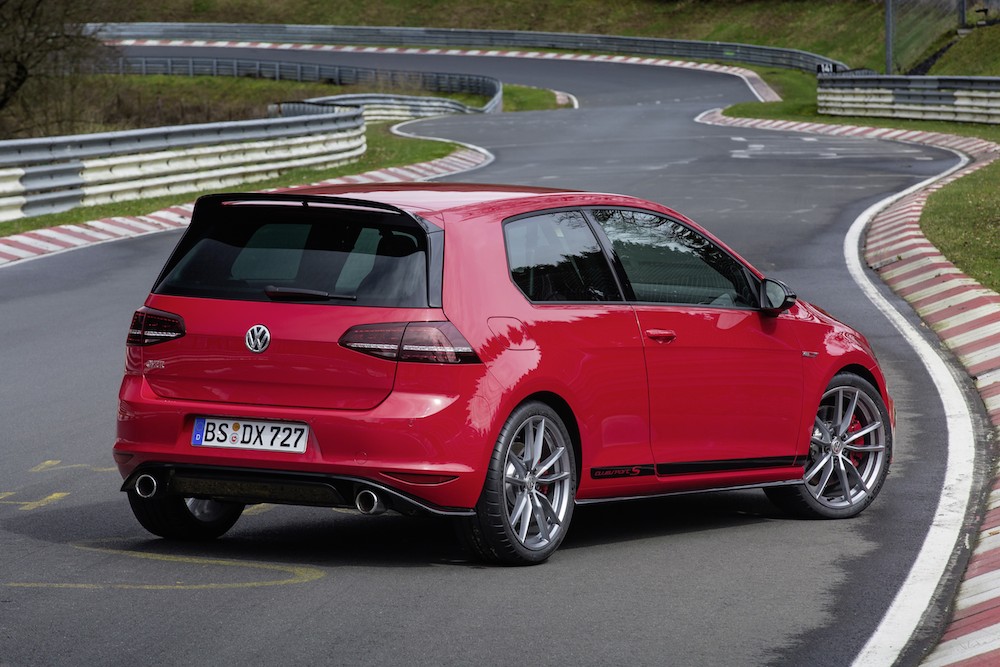 Although the EA888 2.0-litre four-cylinder engine may have seen service in fast Golfs for a number of years, for the Clubsport S engineering knowledge has been taken from the GTI TCR racer. The end product being a consistent 306bhp and 280lb-ft of torque – a substantial jump over the 261bhp found in the regular GTI Clubsport. 0-62mph takes 5.8 seconds, with a top speed of 165mph, which are minor improvements over the  standard car. Helping the enhanced performance is an enlarged exhaust system – up 10mm in diameter to 65mm – which VW assures us creates ‘backfire’ when decelerating. We like the sound of that, literally, as we do the fact the Clubsport S is available with a manual six-speed gearbox only.

Further proving that Volkswagen has thrown the kitchen sink at, or more likely removed it from, the Clubsport S is the fact it has no back seats. Yes, nothing says determination – and perhaps desperation – like junking the rear bench, and turning a practical hatchback into a two-seater. Hosting only a pair of bucket seats means the stripped interior assists with a reduced kerb weight of 1,285kg. Less to carry is a big deal when it comes to lapping the ‘ring, and dropping almost 30kg will have helped, with aluminium brake bells and front suspension subframe also contributing to the diet.

Using Michelin semi-slick Sport Cup 2 tyres, mounted on 19″ alloy wheels, will have also played a major part in securing a record-breaking lap. The traction control system has been modified to reduce wheel hop under acceleration, there’s an uprated gearbox, stiffer engine mounts, and a revised XDS+ system. Trying to manage extra power through just the front wheels has clearly required Volkswagen to fully up the engineering stakes with the Clubsport S, as the front bumper has been reshaped to quell understeer. Even unique hub carriers were designed to increase camber levels, thus countering understeer, and are a measure of the fact VW was really not messing about when it came to taking the lap record. 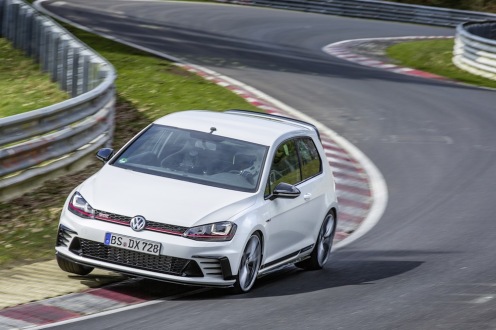 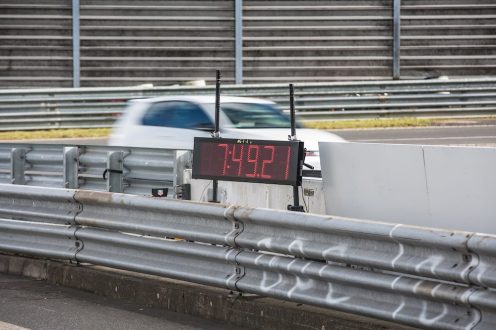 Just in case of any doubt.

After all that work, done predominantly by a team of enthusiasts within Volkswagen, all Benny Leuchter had to do was get in and drive for less than 8 minutes one evening in April. You can watch the full record-setting lap here:

If that’s sufficient to convince you to buy a Clubsport S, then you’ll be joining a special club with only 399 other members. Oh, and you’ll get a special plaque inside the car denoting that you’re one of the chosen 400. We wonder how much extra weight that added…

There’s no news on UK prices or availability, but we imagine numbers will be very limited, and the price will command a 15-20% premium over the almost £31,000 asked for a normal Clubsport. It makes for quite an expensive 40th birthday present, but the lure of breaking Nürburgring records will undoubtedly help VW sell them all, as will the promise of being the hottest Golf GTI yet.