Forgotten what happened in the BTCC last time out at Silverstone? You’re in luck, as ESM’s BTCC Correspondent is here to refresh your memory, and make predictions on tomorrow’s season finale. 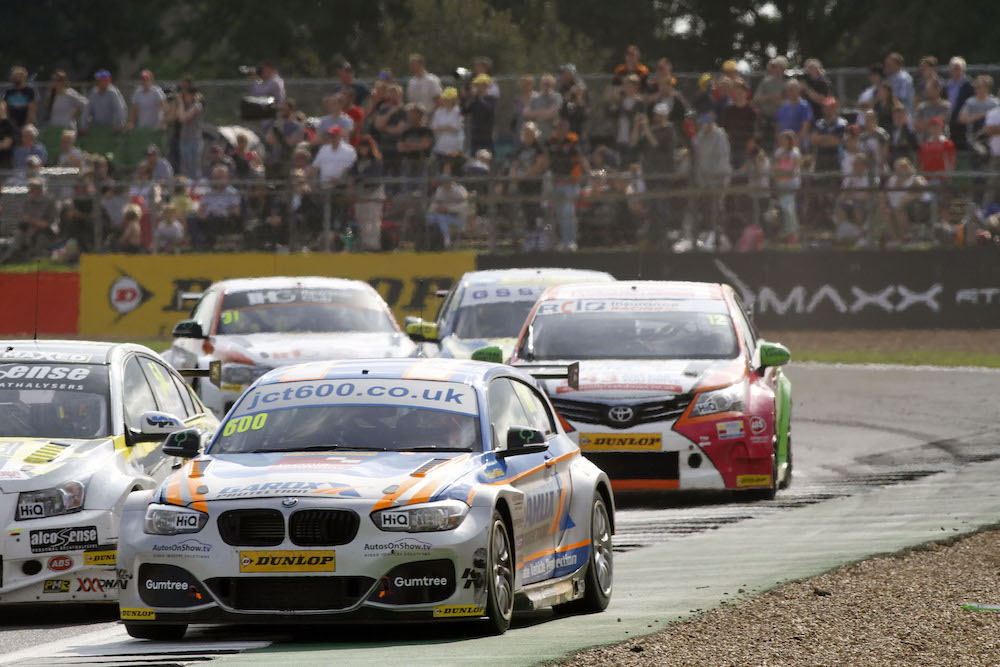 Eight drivers will go into the season finale at Brands Hatch with a chance of becoming the 2016 British Touring Car Championship champion following the latest rounds at Silverstone. Once again, the action-packed races produced three different winners and a bout of controversy. 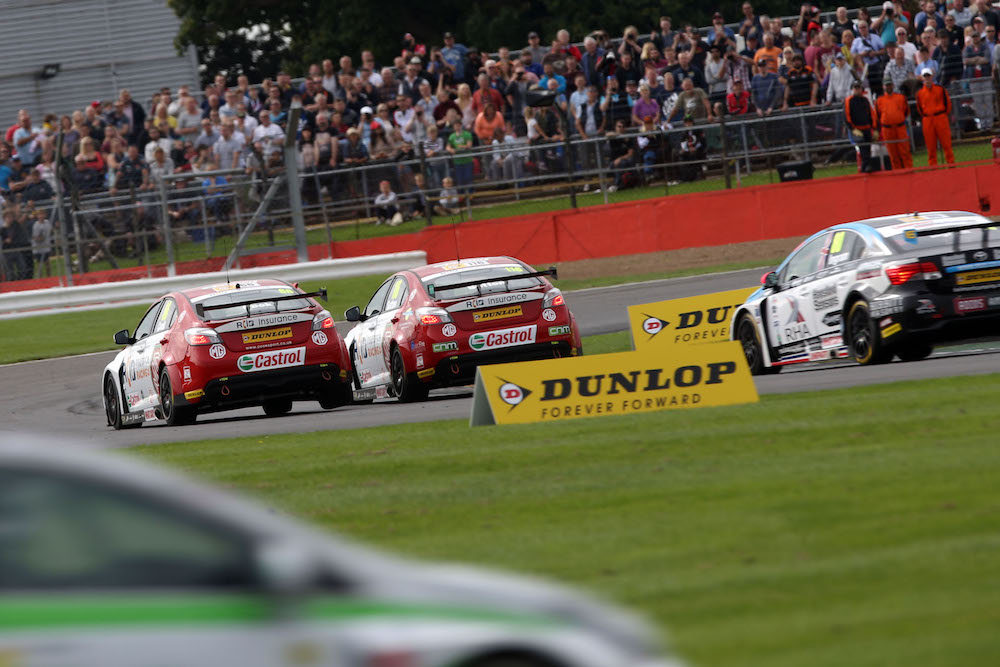 Race One (Sutton*, Cook*, 1st Ingram, 2nd Jordan, 3rd Austin)
The opening race was certainly lively, especially by first race standards. It started with Ingram taking the lead off the line and Jordan moving up the third, before cars swapped places up and down the grid, more regularly than normal. After a robust move to retain third, Jordan eventually lost out on the fifth lap as Cook powered through, while Sutton also closed on Ingram. It didn’t take long for Sutton to make his move and Cook was soon on the tail of the lead duo. Cook had a fantastic battle that lasted several corners with Ingram as he tried to make it an MG 1-2 and he succeeded following a little tap.

There was bad news for title contender Gordon Shedden however, as a puncture ruined his race. Further down the grid, there was an outstanding battle for the final point and fifteenth position involving Mat Jackson, Colin Turkington, Jack Goff, Jason Plato and Tordoff. Meanwhile, at the front, Austin’s strong performance was highlighted when he overtook Morgan for fifth.

Similarly to Shedden, there was bad luck for title contender, and teammate, Matt Neal as he also suffered a puncture. However, Neal has to accept some of the responsibility as a strong battle with Aiden Moffat resulted in the puncture. A little more give and take and he would have been fine.

The MGs crossed the line first and second with Ingram third. However, post-race scrutineering found an issue with both rear wings of the MG cars and Sutton and Cook were excluded from the race result promoting Ingram, Jordan and Austin to become the trophy winners. A post-race appeal came to nothing and a manufacturing fault appears to have cost Sutton, Cook and MG valuable points. Interestingly, the wings had been in place for several races, but due to their recent poor performances, the fault had not been picked up.

Race Two (Jordan, Morgan, Ingram)
Ingram got away well off the line, again, but after three or four laps a huge train of cars were behind him, Jordan and Austin. As is often the case, Austin lost third to Morgan and while he was out of position, Jake Hill also nipped through. On lap eight, Jordan’s hard work paid off with a move on Ingram for the lead and Morgan also found a way past. Austin’s slide backwards continued as Subaru duo Turkington and Plato sandwiched him as they made their moves together, but Austin’s race was soon completely ruined with a puncture just after passing the pit entry. The Subarus then set their sights on Ingram, but to no avail. Despite a late safety car to recover Jeff Smith’s tyre and bodywork debris following a blow-out, the race was finished as a contest and Jordan took a welcome victory from Morgan and Ingram. 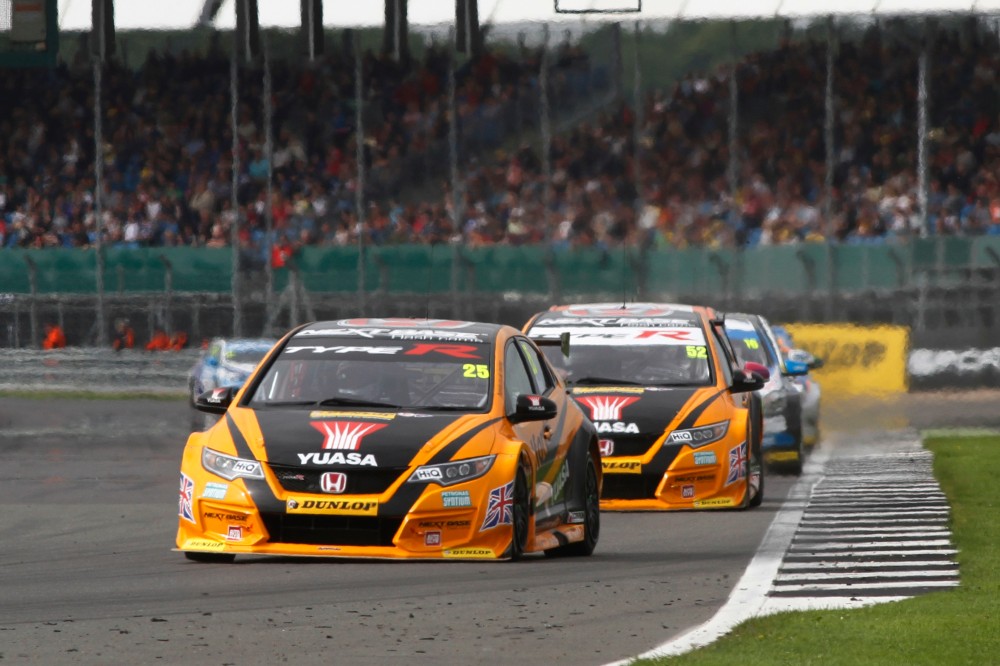 Race Three (Shedden, Jackson, Collard)
The drivers, who really needed a podium to keep their chances seriously alive in the championship, got one. Shedden was drawn on pole, but fast starting Rob Collard was soon up the inside and into the lead off the line. It looked like Jackson had also overtaken Shedden, but a resolute defence from the Scotsman stopped him in his tracks. A fantastic late move under braking from Shedden on the second lap soon saw him back into the lead and scampering off into the distance. Collard was down to third a lap later as Jackson overtook him after a sluggish exit from Copse.

The rest of the race saw Neal and Tordoff make several moves through the pack, a drive-through penalty for Morgan and another puncture for Austin, but this time after contact. Collard, Plato and Turkington were glued to each other for most of the race, but the order didn’t change until the last corner when Turkington overtook Plato following a puncture. Due to the closeness of the cars, Plato fell well down the pack as the cars crossed the line. Shedden’s victory closed the gap at the top to Tordoff who secured his best result of the day in sixth.

Shedden’s victory allowed him to close the gap to Tordoff to eleven points, with Neal a couple of points further back. The media may be portraying it as an eight way battle for the championship, but I doubt the bookmakers would bother even giving you serious odds from Jordan, currently sixth, down. Collard and Jackson are 17 and 21 points behind Tordoff, but it also seems far-fetched to believe that either of the pair will be the winner either. Not only do they need to score more points that Tordoff, which of course is possible, but more than Shedden and Neal also. It would take an extraordinary turn of events for Collard or Jackson to win.

So, who is going to win? Am I going to stay with my pre-season prediction of a Honda driver, probably Neal? No, I’m tipping Tordoff. While an eleven point lead can be eradicated in a heartbeat, I’d rather have the eleven points than not. Tordoff has been Mr Consistent this season and that’s what counts over the course of the season. Tordoff may not win a race at the weekend, but I’m sure he’s going to score enough points to take his first drivers’ crown. We’ll see!

Championship Standings after Round 27 of 30:

Subaru Team BMR – Subaru Levorg GT (Cole, Plato, Scott, Turkington)
Usual poor races for Cole and Scott while Turkington was the stand out performer coming from the back of the grid to secure an eighth and two fourths. Plato was on for three top ten finishes until the unfortunate late puncture in the final race. 7.5/10

WSR, Team JCT600 with GardX – BMW 125i M Sport (Collard, Tordoff)
WSR, Team IHG Rewards Club – BMW 125i M Sport (Goff)
Tordoff still leads the championship despite a poor weekend by his standards. Collard remains in the hunt after three top seven finishes while Goff was in the lower realms of the points. 7/10

Halfords Yuasa Racing – Honda Civic Type R (Neal, Shedden)
An awful first race for the title contenders with a puncture each, but great recovery drives and some reverse grid pole luck means that Shedden and Neal are still very much in the hunt for another drivers’ crown. 8/10

MG Racing RCIB Insurance – MG6 GT (Cook, Sutton)
How do you rate MG for Silverstone? On performance or results? They seemed to be back to form with a great qualifying and first race result, only to be disqualified which obviously ruined the second race. A great fightback in the final race secured two top ten finishes. 5 or 9/10?

Motorbase Performance – Ford Focus ST (Jackson, Jordan)
Both Jackson and Jordan would have been hoping for even better or better luck, but they both remain in the championship hunt after some great finishes at Silverstone. 9/10

Handy Motorsport – Toyota Avensis (Austin)
A second podium of the season for Austin brought welcome joy, but it was short lived as two punctures ruined the day despite some strong running. 6.5/10

Speedworks Motorsport – Toyota Avensis (Ingram)
A great weekend for Ingram with two podiums before a problem in the final race resulted in a retirement. He never seems to be able to have three good races. 8.5/10

Notable mention: Jake Hill. A strong performance from the young man this weekend, although the results didn’t necessarily go his way.