The AMG GT R stole the show at the 2016 Goodwood Festival of Speed, with a combination of visual aggression and aural menace. Let Ned Jasper tell you more about this green monster.

Louder, lower and angrier – that, I presume, must have been the design brief when AMG decided to come up with this thing. It’s called the AMG GT R, and it has more power than the standard car, and it’s also a little lighter too – but we’ll come to that later. For now, all you need to know is that this Hulk-like incarnation of the AMG GT has enough road presence to make even a Porsche purist reconsider their chosen allegiance.

Underneath the bulging muscles and flared nostrils is the same AMG GT that we know and love. Only this time, the blokes from AMG have agitated it so much it’s been turned up to 12! The same 4.0-litre twin turbo V8 remains, but now it’s packing even more punch – up 74bhp to a colossal 577bhp! What’s more, the torque receives a considerable hike too, now peaking at 516lb-ft – that’s an increase of 37lb-ft from before. 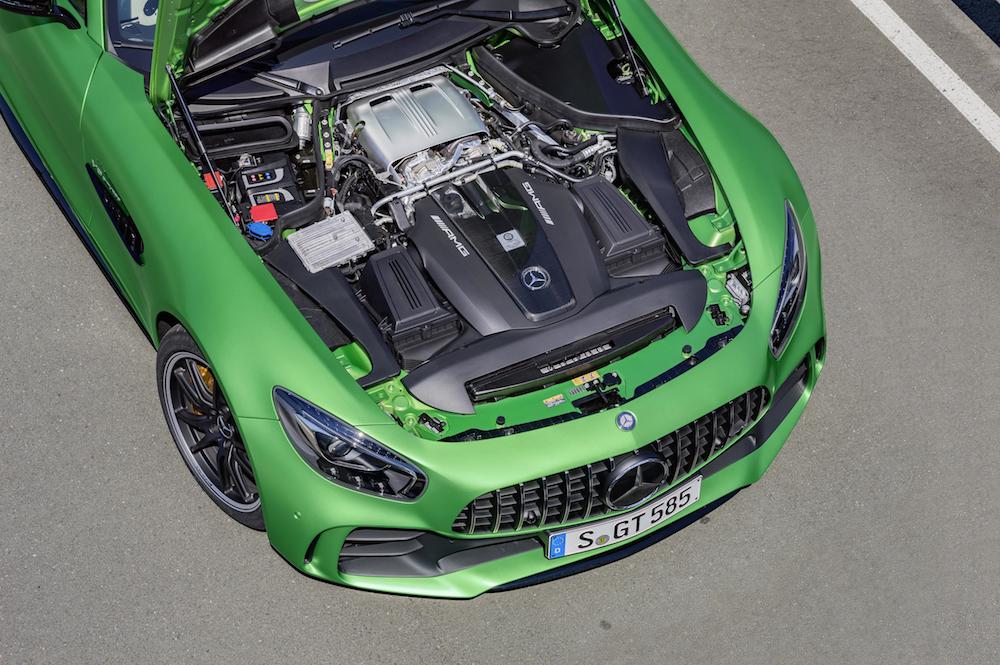 To help convey this extra oomph to chimerical performance, the gearbox has been altered too, providing the optimum in expeditious gear changes. It should also mean that the availability of  ‘snap crackle and pop’ becomes even rifer with downshifts.  All-in-all, the drivetrain modifications mean that this lurid creation now roars to 0-62mph in a brisk 3.6 seconds, and keeps on accelerating until a top speed of 198mph!

However, although AMG clearly prides itself on brutish straight-line performance, it appears to have shifted focus to how it manages in the twistees. Most notably, on the fearsome Nürburgring-Nordschleife. Interestingly, the vivid colour scheme of matt green magno paint has references to the ‘ring via its nickname ‘the green hell ‘.

The chassis alterations consist of, but are not limited to; a wider track 46mm in the front, 57mm in the back, carbon ceramic brakes as standard, and new 10-spoke lightweight forged wheels coupled with the wider Michelin Cup 2 tyres (a compound with a track bias). Plus, aluminium components in the suspension have been implemented to reduce unsprung weight, and a wealth of carbon-fibre components have been added too. The result? A shaving of 15kg overall. Not bad…

All this weight loss becomes undone at speed, as the new rear wing generates 155kg of downforce. In addition to that, the GT R incorporates an active front splitter, a new diffuser, plus an active underbody panel to aid the latter. Other aero modifications include louvres in the GT3 racer-inspired ‘Panamerica’ vertical slated grill, and chunkier air intakes. All of which help the engine regulate temperature and improve high-speed stability.

As with all modern sports cars, the GT R comes with a myriad of suspension and traction control settings. Three for the suspension setup, nine for the traction control, and a couple for the active rear-wheel steering. Yes, Mercedes has taken the leap to incorporate rear-wheel steering: it turns the opposite way to the fronts up to 62mph, then the same way above that speed. This is yet another aspect of the GT R that’s been tweaked for optimum agility.

Delve into the insides of this beast and you’ll find the cabin virtually untouched. The electric seats are swapped for lighter, manually adjustable, ones and the stitching and seatbelts are now yellow. 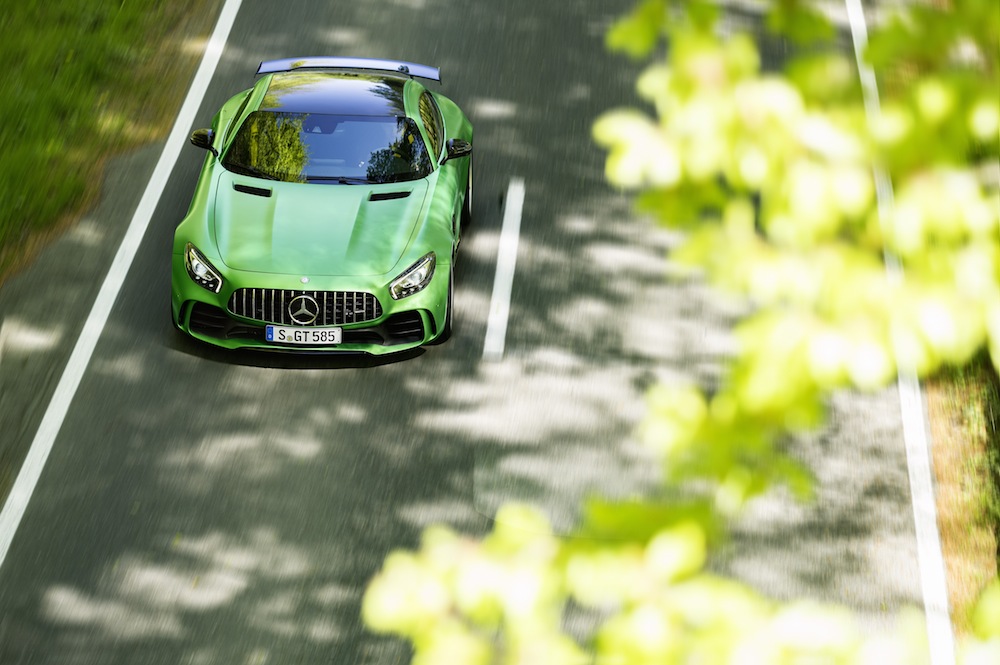 Unlike the AMG GT R’s competitors – the Jaguar F-type SVR and the Porsche 911 GT3-RS – the AMG is a little more attainable. Not because of the price, that’s expected to be around £150,000, but because Merc-AMG bosses say that production numbers will not be limited. Hoorah!!