The single most important part of this article? That the new 2018 Mustang is available with an ‘Orange Fury’ signature paint colour option. But there’s much more than just that, honest…

Can you believe that the current sixth generation Ford Mustang has already been around for over three years? No, we couldn’t either, until we checked back through previous posts to find the first photos of the 2015 model year ‘Stang. So, after just over 36 months, Ford got Dwayne ‘The Rock’ Johnson to pull the covers off the new 2018 Mustang. We’re not even kidding about that.

No, it doesn’t look hugely different. This is, after all, a mid-life facelift rather than a full on redesign of Ford’s pony car. The biggest external change is a new drooping snout, courtesy of a lower bonnet line and front grille, matched with more aggressive and angular headlights. The latter are now full-LED units, matching the LED taillamps found at the rear. Add in redesigned bumpers, plus extra exhaust tips for the 5.0 V8, and that is pretty much your lot. Not forgetting a choice of new alloy wheel designs, and paint colours, of course.

There’s the promise of more luxurious materials inside, with hand-stitching to the centre console cover, a new Mustang badge and – most significantly of all – a new key fob design. Ok, we’re perhaps being slightly flippant, but that’s due to the evolutionary nature of the styling updates.
In terms of technology, the addition of a customisable 12″ LCD instrument panel is a genuinely big deal, offering a choice of different display dependent on whether, normal, sport, or race mode is engaged. Preferred choices for suspension, steering and other settings can now be saved, avoiding all that annoying button pressing every time you get in the car. 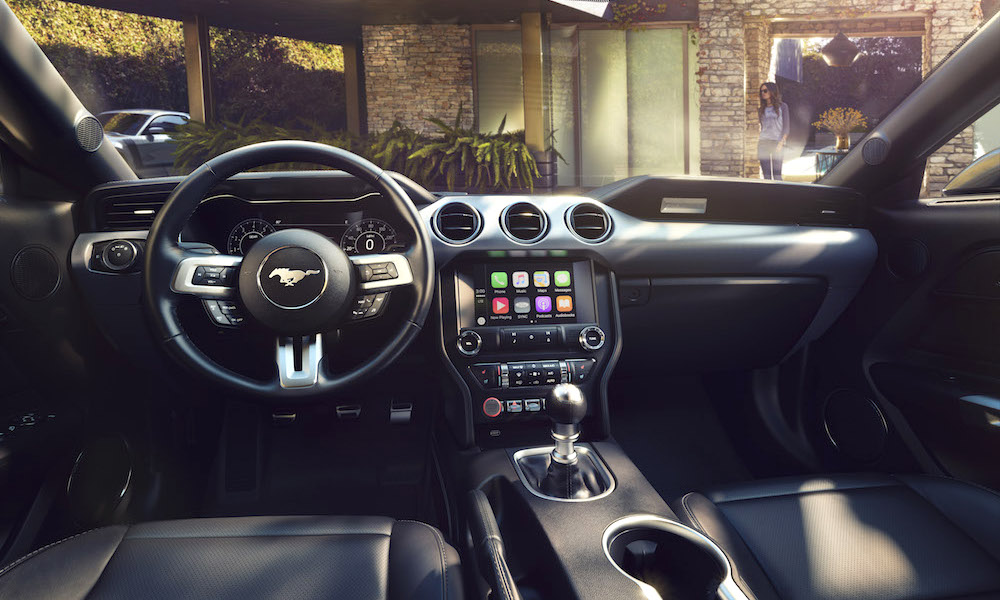 Finally, there are mechanical changes beneath that subtly tweaked body. All models get revised shock absorbers and revised suspension settings, whilst magnetically adjustable dampers become an option as part of the Mustang Performance Package. The 2.3-litre four-cylinder EcoBoost turbo engine gets more overboost at wide-open throttle, whilst the 5.0-litre V8 gains more power and the ability to rev even higher. There’s no official performance data yet, but expect improvements on current engine outputs, for sure.

Perhaps the biggest talking point is the replacement of the previous six-speed automatic gearbox with an all-new ten-speed unit. Yes, ten whole forward gears. In a Mustang. The new auto’ promises improved shift times over the previous ‘box, and comes with steering wheel-mounted flappy paddles. Should you want to keep it old-skool, there’s still the six-speed stick shift available as standard, but with an uprated clutch and flywheel.

So no, it’s hardly a revolutionary overhaul but, after suggesting the possibility of a hybrid Mustang in the not too distant future, perhaps the world needs a little stability. Perhaps even more so after this coming Friday…